Today I received the goodies from Kim's birthday contest. Two beautiful skeins of Mountain Colors Bearfoot in Northern Lights. I'm going to share this most generous gift with a knitting friend. 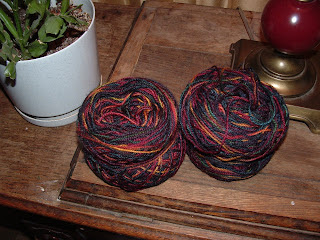 The party was great. Lots of work, lots of talking and lots of catching up with people I hadn't seen in years. The gift a success and somehow with my less than stellar photography skills I was the only one who came camera ready.

I can say without hesitation that I'm no longer up to the challenge of weekend road trips. Traveling 1000 miles roundtrip in 52 hours is way out of my league. I worked on Daphne on the way up until I ran out of daylight and cast on a pair of socks before we hit the road coming back and continued on them until darkness caught up with us once again.

I've been itching to knit a pair from MSKS and the trip was the perfect opportunity to get started. These are the Broad Spiral Ribs. 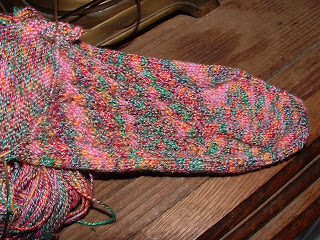 At first I was hesitant thinking that the yarn would overpower the pattern. I'm getting the barber pole effect on the foot and when the short-row heel is complete there's no telling what will happen. I cast-on using the Eastern cast-on from the new IK. I thought it would be easier but the execution is almost the same as the figure-eight cast. I didn't have to adjust the first row to tighten up the stitches as I have to most of the time when I use the figure-eight. I'm certain I'll be using this cast-on in the future.
Posted by Beverly at 9:39 PM
Labels: Broad Spiral Rib Socks, Eastern cast-on, Mountain Colors Bearfoot

I haven't had a chance to look through MSKS yet but I'm sure it'll be a treasure just like the first one! The barber pole effect doesn't seem to be overwhelming or obnoxious like it can be with some colorways that have higher contrast. The yarn looks beautiful in that pattern! Thanks for stopping by and commenting on my blog this evening! :)

I love Mtn Colors Bearfoot. It is one of my favorite sock yarns. Up there with Socks That Rock, etc.. It is so nice and soft and fuzzy on the feet. :)

It does look like you have enough for two pairs there.

I've made one pair of socks with Mountain Color Bare Foot, I like the mohair content in it, but the pill quite a lot, still they are wonderful on my feet.
Thanks so much for the info on the hair, very interesting! I know one ball is enough for one pair. ;o)

Ohhh How pretty the socks are. I love the barber pole effect.

I answered your Koigu questions in my comments. That is how I am trying to answer questions these days, but I am not sure you read that post or are used to this communication method. So just go back and look under your comment.

The Bearfoot is great! Enjoy.