I don't know if I'm heading toward a knitting slump but I've been having a hard time committing to any projects. Out of desperation I once again cast on the Charlotte's Web shawl. I'm into the third colorway so this should soon be an FO.

I finished these gloves last year but just finally got around to taking pictures. 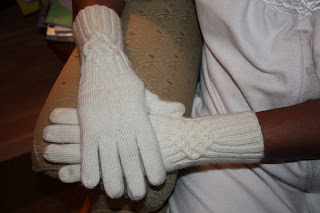 I tried to photograph these before mom went to Vegas. I looked for them while she was gone but immediately knew that she had taken them with her. 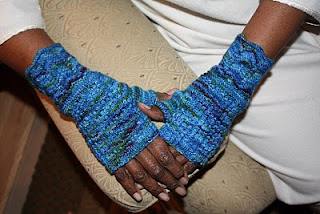 This was a wonderful pattern to knit. The mitts are very feminine and look and fit great. I enjoyed knitting with the Jitterbug. I have several other colorways that I will consider using for mitts instead of socks.
Posted by Beverly at 11:14 PM 3 comments:
Labels: "Della Mitts", Colinette, Knotty Gloves

You know you got it bad when your sister, a non-knitter, starts buying yarn for you.

Thursday my sister told us that she saw some pretty yarn at Tuesday Morning. On Friday she bought some for us and on Saturday we were all on the Tuesday Morning yarn crawl. We bought way too much but the prices were reasonable and the quality good. Most of the yarn is KFI, Knitting Fever, brands. 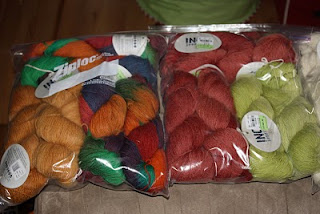 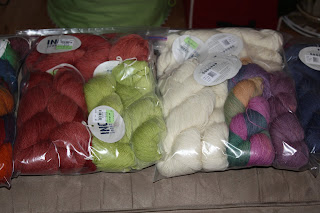 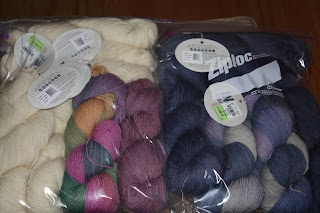 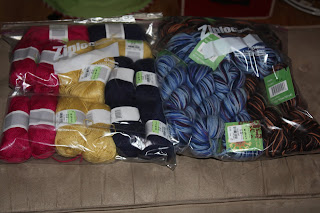 Last month I purchased the Corrie Fair Isle Vest kit in the neutral and bold colorways from Knit Picks. 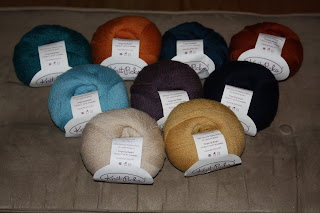 I received all the yarn for the bold version but only 5 of the skeins for the neutral version. When I called them they said that I didn't order all of the skeins. Further checking on my part revealed that they didn't have the colors in stock and therefore moved them to the notify list. They are supposed to come in this month and since I don't have plans to order anything else so much for "Free Shipping" I thought I was taking advantage of by adding some things to my original order to make it $50.00.

This past week I received two of the best books I've ever purchased. The Haapsalu Shawl and Shirley Paden's Knitwear Design Workshop. 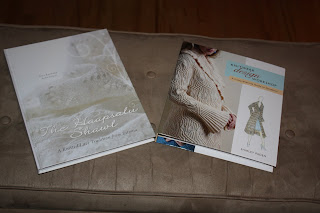 The first is a compilation of Estonian shawl patterns from the town of Haapsalu. It is not your average pattern book but a beautiful large and heavy coffee table-sized book. It contains over 100 stitch patterns and the instructions for creating your very own Haapsalu Shawl. The book contains the history of the Haapsalu shawl and is beautiful photographed. Each of the stitch patterns is clearly photographed and the charts are large enough to easily copy without enlarging.

I own many books on knitwear design but Knitwear Design Workshop is one of the most comprehensive I've seen. It is everything I was looking for when I purchased Deborah Newton's Designing Knitwear. There are numerous worksheets and the formulas used to calculate things such as armhole or neck shaping are very will explained. I plan to put this book to the test in a couple of weeks and post a follow-up.

I'm looking forward to our workshop with Margaret Fisher. I completed the last of my swatches last night. This is the second time we have sponsored an instructor. I'm taking all four workshop classes. Details can be found here Palmetto Purlers.
Posted by Beverly at 7:46 PM 4 comments:
Labels: "Corrie", "Tuesday Morning", vest

Last night we got a light dusting of snow. When I went to bed everything was covered but by the time I got up this morning most of it was gone. It's hard to believe that we got snow twice in the same year! No pictures this time. I've been nursing a case of bronchitis and sinusitis and I'm finally feeling much better.

This past weekend we went to Wadmalaw Island (which is in South Carolina) to celebrate my Aunt Ida Mae's 75th birthday. It was a small family gathering and my aunt was suprised when she found out. We didn't know it was a surprise party until we arrived. She was getting out of the car when we drove up but since her distant vision is gone she couldn't see who we were and thought we were friends of one her grandchildren. 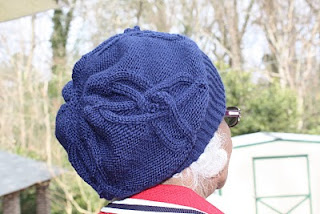 I learned a valuable lesson. If someone pays you to knit something for them be sure to get half of the money up front. The lady who I knitted this for thought I was charging her $15.00 even though she repeatedly asked and I repeatedly told her the price. I was prepared to keep it when my oldest brother's friend saw it and immediately took it off my hands. The color is much deeper and prettier than this picture shows. I have one skein remaining and may have to make one for me.

I finished the Mars Hat and Scarf for my brother Charles but I've yet to take pictures. I'm going to try to get them taken this weekend.

I started another pair of fingerless mitts for my mom. They are the Della Mitts a free Ravelry download. I'm using some of the Colinette Jitterbug mom bought for me when she was in Florida last year. The color is Blue Parrot and they are gorgeous. 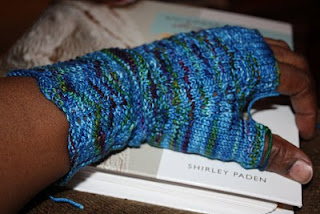 My sister requested a hat and even though I said I wouldn't knit anything else for her I did. I used a chart from Beautiful Knitting Patterns to make a hat with a Fair Isle band of leaves. 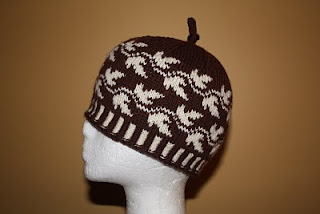 I cast on using the Double-Start Cast on from Folk Knitting in Estonia and worked in corrugated ribbing. The hardest part was the decreases at the top which took me 4 tries to get right. I'm glad the yarn was up to the challenge.

I started this Cotton Kisses baby sweater in June and put it aside when I realized I wasn't going to have enough yarn to finish it. One of my Guild members, Janie, made the other sweater included in the pattern in the smallest size and gave me the rest of the yarn she had last. As soon as it arrived I picked up the stitches and finished the band. I think it is an adorable sweater even if it won't fit Anniyah until later. 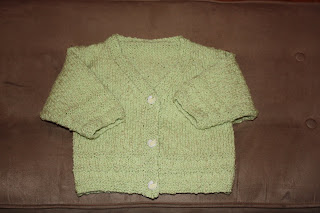 I'm going to have to find a way to blog more often so that I don't have these large updates. The past two weeks I've been glued to the Olympics and there was no way I was going to blog at 1:00 AM. I was too busy trying to make it to bed.
Posted by Beverly at 10:13 PM No comments:
Labels: "Beaded Cardigan", "Della Mitts", "Fair Isle", Anniyah, hats, Mars, snow
Newer Posts Older Posts Home
Subscribe to: Posts (Atom)