For several days I've been re-reading books, contacting designers, writing instructions and organizing and printing materials for a major sock class. It wasn't part of the original plan but when the planned instructor dropped the bomb and backed out at the pre-class meeting what's a girl to do?

I find it rather amusing how things have a way of working themselves out. Last year I began exploring various techniques for knitting the heels and toes of hand knit socks. I started with toe-up techniques and had progressed through the Figure-Eight, Magic and Easy Toe cast-ons. In the heel department I learned Judy Gibson's standard heel, PGR's Short-row heel and a modified no-wrap short-row heel with gusset. (No clue as to its' proper name if there is one.) Over the next 3-4 months I'll have the pleasure of imparting these skills to my fellow guild members.

I don't think I'll ever reach the point where I'll want to stop learning or sharing what I learn. There have been many occasions where fun has been made of the sometimes pointless facts and bizarre info stored in my brain. Usually the jokes end when someone realizes that I probably know the info they're looking for and if I don't I can direct them to the most likely source. There have also been times when I've found it to be a bane to my existence. I can't get out what I really want to use but the useless info flows out just as freely as it flows in.

At this moment I am a student of the sock. Fully engrossed in all the minute details that go into manufacturing what many people see as a useless knitting process. Anyone who knows the luxury of wearing a perfect fitting, beautifully designed and knitted pair of socks would howl with laughter at the absurdity of such thoughts and the nerve of people to speak them.

Tonight I went to sock heaven.

The German Twisted Cast-On took me there.

Why did it take so long?
Posted by Beverly at 10:24 PM 1 comment:
Labels: German Twisted Cast-ON

I've said before that there is a certain magic in letting Noro "do its' thing." I made that decision when knitting Rosedale and I'm sticking to it for the Carnival cardigan/jacket. The only concession I'm not willing to give up is that the balls must flow from the same direction. (No need to go completely overboard.)

The result. Row upon row of hypnotically colored stockinette stitch keeps me mesmerized. The changes and surprises, the forced randomness - there's a method to the madness of the knots, make me want to see what's going to happen on the next row and the row after that and the row after that, and so it continues. I'm using EZ's percentage formula as a guide for knitting this sweater. So far, I'm almost finished with the body section and will soon cast-on for the first sleeve. 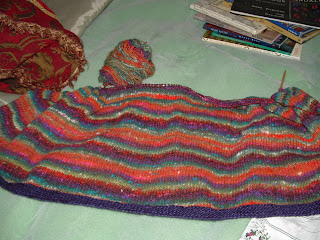 The stack of books on the bed represents the other knitting-related task currenly occupying the remainder of my free time. The Palmetto Purlers Knitting Guild's upcoming program is a comprehensive sock class. The class will be taught over the next 3, possibly for months and will include something for all levels of sock knitters. To that end, I've hauled out the research materials and have begun getting the topics and lessons together.

So even though there are some calculations involved in making the Carnival sweater, they are relatively simple and the rows of endless stockinette a welcome relief when taking a break from planning and writing the lessons for the class. Nothing like "mindless knitting" to take you away from it all.
Posted by Beverly at 9:30 PM 2 comments:
Labels: Carnival, Silver Thaw

Often I'm a creature of habit. Good habits, bad habits, annoying habits, but habits none the less. One of them is that I must have a sweater, a sock and a lace project concurrently on the needles. I don't remember when or why but it must have occurred shortly after I started lace knitting.

After swatching and a few measurements and calculations, I cast-on a sweater for mom tentatively named "Carnival". It's Noro Silver Thaw Color #5. Mom picked this out as the lesser of evils last year as she was not really pleased with the choices available. The stripes are only about a row or two wide. The coloring however is wonderful and I think the planned project will work out okay. 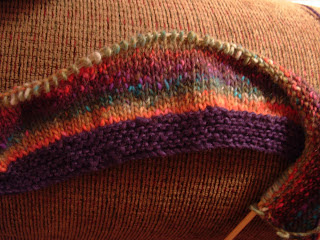 This afternoon I visited Columbia's newests lys "In the Loop". It was very nice to meet Lara since we only got to say hi at the Palmetto Purlers Guild meeting last night. I was running late and she had to leave when I was coming in the door. It's always nice to meet new knitters, especially those with yarn and tools.
I'm sure there are exciting things to come from this shop. I've been to the sister shop "Knit" and even though the shop here is much smaller it carries some unique items not available anywhere else in Columbia. Thanks Vera for giving both of us the "heads up".

I started working on the plans and course material for an extensive sock class the Guild will conduct over the course of the next 3-4 months. There may not be much knitting with the exception of heel and toe swatches, but I'll be sure to sneak in some time for the new sweater and finish the hoodie for my nephew and lest I forgot mom's Xmas present. I ran into a few complications with the hood last night, mainly a running out of yarn complication, which I hope can be resolved by doing the hood in another color as originally planned.

This has quickly become one of my favorite sweaters. It's comfortable and warm, the colors are amazing and the fit is wonderful. I definitely plan to knit this sweater again. 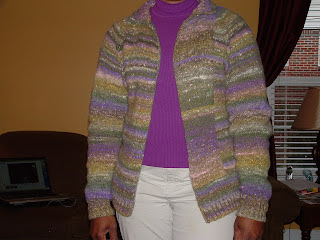 Modifications: I added and additional inch to the body which I love. The extra length that was added to sleeve wasn't necessary since the fabric grew a bit in length with block. I also didn't complete the intarsia block in the upper center back. It didn't add anything to the sweater for the fussiness required to knit it.

Mom has once again expressed an interest in knitting and socks in particular. This afternoon we picked out some Mountain Colors 4/8's wool and Brittany dpn's. 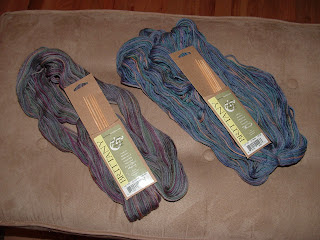 The collar kicked my butt on the first try. I was closer on the 2nd attempt. Thank goodness it made the rather obtuse instructions very clear upon visual inspection and every thing clicked for the third attempt. It was a breeze except for the sleep monkey that jumped on me at 2:00 AM Sunday night and made it impossible for me to knit the last 4 rows.

Blocking is in full force and the sweater will probably take a few days to dry. I'm still on the fence about the zipper. I thought about widening the front bands and adding buttons. The sleeves grew more than I expected with blocking and since I added an additional 1 1/2" I'm hoping that they aren't too long. 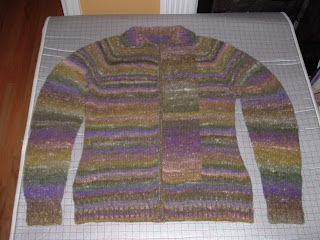 It's getting cold again so I'm crossing my fingers, eyes and toes in the hope that this cold snap won't blow over before I get to wear it.

Pumpkin has been rescued from the unfinished basket and has some nice sleevage going on. I've been trying to visually adjust to seeing these very short arms on a sweater that has a disproportinately long body. The only knitting remaining is the hood so I should have another FO by the weekend. 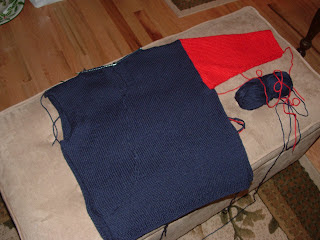 There's been a little stash enhancement over the past 2 weeks due to the lys' inventory sale. 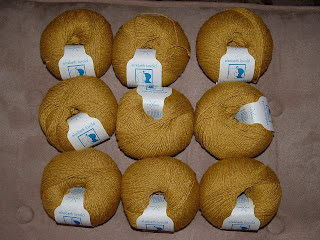 Gold Hempathy for a sweater for Mom. 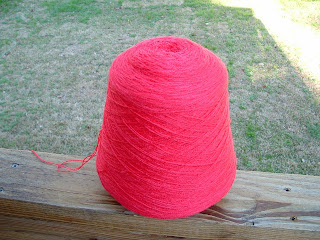 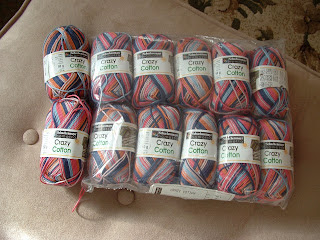 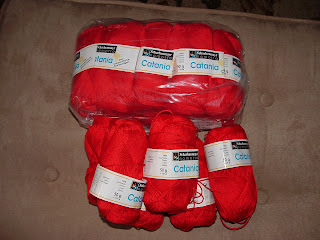 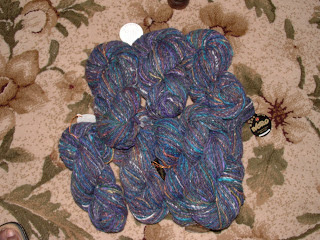 I'm undecided about the last three. I'm contemplating using the knitting machine to knit the cottons now that I've gotten re-acquainted with some of the functions and accessories.

I also picked up Knitting Nature by Nora Gaughan. It's a wonderful book and I can't help thumbing through it and marveling at some of the designs. Much to my disappointment it is loaded with errors. Here's a link to some of the errata Knitting Nature Knit-Aong errata.
Posted by Beverly at 9:09 PM 1 comment:
Labels: Knitting Nature, Pumpkin, Rosedale

Now that the holiday rush is over knitting begins in earnest. I'm dedicated to finishing Rosedale so that I can wear on the one or two cold days that we get occasionally. Growing up I can remember needing gloves, scarves, hats and coats here in SC. Now it I rarely need any of them.

I more likely to throw on a sweater and a pair of gloves without a second thought to grabbing a jacket. This strange phenomenom is due I'm sure to the increase in age and the decrease in hormomes. It certainly makes driving and riding in a car much easier.

Rosedale became a little tedious for a while. The yoke is almost finished and since the sweater is a raglan knitted in once piece, all that will remain to be completed is the collar and the front borders. 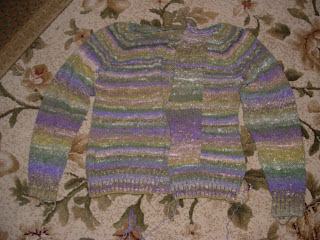 The colors are way off!!! The blue is actually a shade of lavendar and greens are yellow-greens, olive tones. I love the natural color and will try to get some true color picks when the sweater is complete.

I cast-on for the Alpine Knit Scarf from Victorian Lace Today. It's mom's Xmas present so I'd better hurry up and get it finished. I'm late for the second year in a row, but with all the unpacking and cooking I did during the holidays she's letting me slide once again. She had her "good" knee scoped on Dec. 19th and I became the official Xmas and New Years Eve/Day chef.

For the next couple of weeks it's going to be slow and easy going here at Chez Fiberitis.
Posted by Beverly at 11:03 PM 2 comments:
Labels: Alpine Knit Scarf, Rosedale
Newer Posts Older Posts Home
Subscribe to: Posts (Atom)