I've been working on a very special project. My neighbor's daughter is giving her husband a surprise 50th birthday party this weekend in Ardmore, Alabama. They live on the Alabama/Tenessee line in the mountains so I figured that a nice warm hat would be a good gift for when the winter comes.

I finished Ullared Friday afternoon about an hour before we left Columbia. This hat would have been finished last weekend but my first two attempts in sizes large and extra large were way too big. Add to that an unexpected gauge issue and not having the size 3 16 inch circular and it was a recipe for disaster. Last Saturday I picked up a the size needle and after a few chart execution errors and corrections the hat is now blocking and will dry on the way to Alabama. 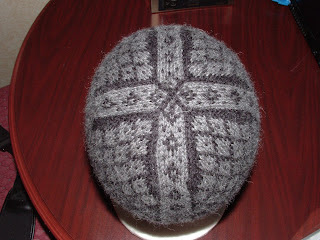 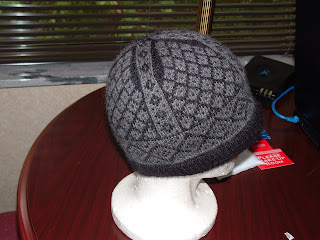 Modifications: The pattern called for a "Two-Strand Cast-On for Knit-and-Purl Ribbing". I used this method for the first two hats. I switched to the "Yarn-Over Tubular Cast-On" aka "Italian tubular ribbing" for the final hat. Both of these techniques are included in the book. I like the professional finish the tubular cast-on it gives the edge and will use it again.

Even though it took the third attempt to get everything right I've learned two new techniques in the process and it was well worth the effort. This is beautiful hat. My brother Charles has already asked me to make one for him.
Posted by Beverly at 5:06 PM
Labels: Brown Sheep Nature Spun Sport, Ullared

That hat is sensational!

I'm so glad I have this book. This hat is fantastic! You are very patient, with all your trial and errors, I think I would have looked for another project! ;o)

Wow. That has is gorgeous. You did a great job. I am going to have to look into getting that book!