Can I get a whoop, whoop! The body of the Skyline sweater is complete. I won't be wearing it this weekend, but the monkey is finally off my back. This sweater was becoming my Albatross and what I really needed to do was take a step back and re-group. I'm on to the seemingly endless rows of garter stitch trim which marks the home stretch. 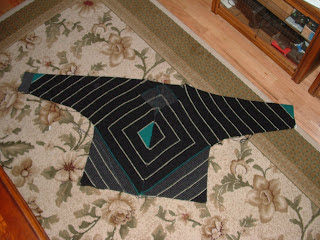 It's easy to determine which direction to go in on the knitting front. My co-worker's baby was born yesterday morning so I'll need to get moving and finish the baby sweater. I need to knit the shrug for my niece and finish the Belted Wrap Jacket for mom. At some point I need to throw some socks into the mix. It's been months since either of us has donned a new pair.

This weekend I'm attending the knit-in in Greenville and I'm looking forward to hanging out with some knitting buds I met last year. There will definitely be some stash enhancement, imbibing of beverages and lots of knitting all around though not necessarily in that order. Details when I return.
Posted by Beverly at 9:11 PM 3 comments:
Labels: knit-in, Skyline

A Different Take On Hats

Sometimes you just can't resist temptation. I fought the urge to knit a Woolly Wormhead hat as long a I could. My recent issues with the Skyline jacket gave me the excuse I needed. On Friday I started the Marrow Joe, finished the knitting on Saturday and grafted and blocked it yesterday. Today I added the pompom and now have another hat for the "hat basket." This hat can easily be knitted in a day, but I took my time and worked on this and the baby sweater this weekend. 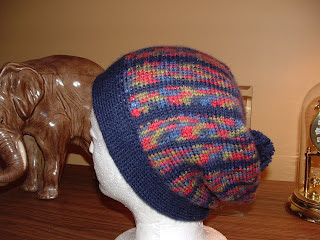 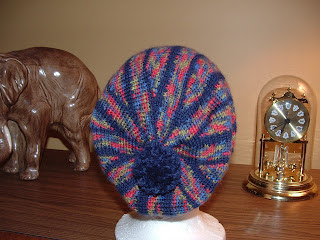 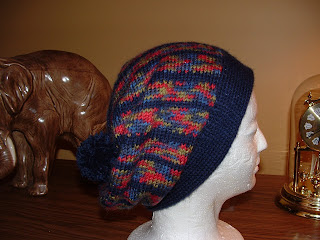 I started hat #2, Windward, at work today in Queensland Collection Kathmandu DK. Not sure if this is the right yarn and once again will reserve judgement until I've got a little more done.

This year I'd like to stretch my wings a little more and finally get around to completing and submitting my Master Knitting Level II package. Last year I focused mainly on socks and would like to focus more on garment design. I've got some ideas floating around and only time will tell whether I'll be able to bring them to fruition.
Posted by Beverly at 7:13 PM 2 comments:
Labels: "Marrow Joe", "Woolly Wormhead"

I'm making good progress on the Skyline jacket. Both sleeves are done and joined and if I hadn't left my contrast stripe yarn at work I would have finished the left front. Not one to be discouraged, I picked up the arm band on the right sleeve. I'm thinking that I'll need to add another half inch or so. This weekend I'll devote my time to knitting the band that surrounds the jacket. Next weekend I'm attending a knit-in in Greenville and would love to have this finished so that I can wear it. 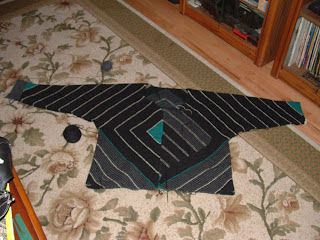 I finally got a chance to take a picture of one of the red Hannah's I knitted over the holidays. My co-worker who received a red one brought hers to work so that I could photograph it. This color is my favorite of all of them. 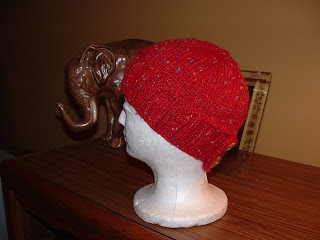 The younger boys told me this weekend that they want knitted hats. My youngest nephew is three and his mother says that he has taken possession of the hat I gave her for Christmas. I let him wear one that isn't quite the right size, he has a big head, and he didn't want to take it off. He's only three, but he understands that I make things when I knit and he can wear them.

The other one is eight and he's seen me knitting for so long that he isn't fazed by it anymore. When he was much younger he was amazed by the fact that I was always knitting or reading something knitting related. When someone would ask me what I was doing his immediate replay was "some knitting." If someone asked what was I reading they received the same reply. Most of the time I was, but on a few occassions I wasn't. He was so used to that being the case that he didn't even bother to check anymore.

This past weekend I had both of them over and the knitting was at a minimum. They'll be expecting their hats soon since they've already put in their requests. I don't think they'll be affected by the sweater curse in the future.
Posted by Beverly at 10:20 PM 3 comments:
Labels: Hannah, Skyline

I'm normally not one to wait for natural light to take pictures. My photography skills are nothing to brag about, but the hat and scarf begged for just the right condition. I finally got around to blocking them Thursday night and realized that the crown could have been a little less full, but overall I'm pleased with the set and I'm sure Nicole will enjoy it. 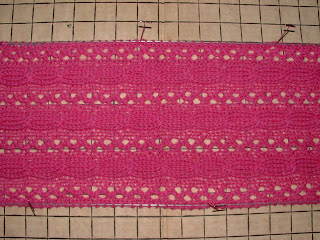 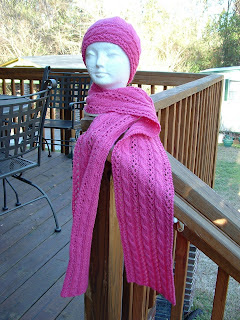 I was going for an artsy shot, alas the wind was not cooperating. It's been bitterly cold all day and I'm sure it's even colder in Charlotte so I'm anxious to get this to her. 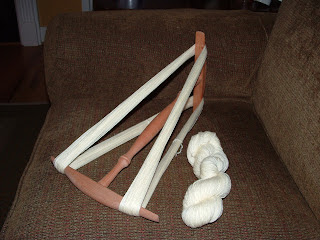 In the good news department, I'm knitting the left front of the Skyline Jacket. Tomorrow is a holiday for the state and I hope to have it finished by then. After that its' miles of garter stitch trim and finally another FO 2008. I'm picking out the next projects and for now I think I'll stick to cardigans with the flakey weather we have around here that may be the best option.

I still have some hats to make for the boys. The first one will be one for me. The Strudel by Woolly Wormhead. Vera has done several styles and the Strudel is my favorite. Even though I haven't made any of the hats, I highly recommend "Going Straight - A New Generation of Knitted Hats". The tutorials alone are worth the purchase price and it comes in three versions.
Posted by Beverly at 6:52 PM 4 comments:
Labels: "Cable and Eyelet Rib", dyeing, Lanett, Skyline

A late "Happy New Year". The hat saga is finally over and I'm back to regular knitting. All were well received even though I did have to explain how to use some of them. I made a total of seven Hannah's including two for co-workers and 3 headbands. Somehow I still managed to be short one gift so I'll be working on remedying that situation. 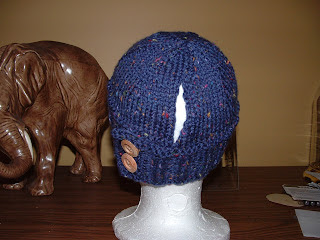 Hannah
The Retro Redux Shrug from LaceStyles was a wonderful project to knit. I finished it in time for gift delivery. That process has been delayed by the fact that I forget to remove it from the machine after spinning it dry and by the time I remembered it had been agitating for a while. The laciness kept it from felting completely but it ended up being way too small so I've passed it on to my sister's friend. I asked my niece what color she wanted the new one to be and she likes the original color so I've already purchased the yarn for a new one. 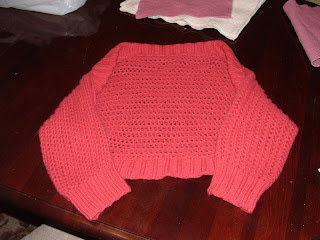 I've never knitted much for people outside my immediate family. This includes my best friend. During the holidays she asked if I would knit her a hot pink scarf. I decided to knit a scarf and matching hat. I have enough left over to make some matching fingerless mitts but I'm nut sure what hand size to make so I'm going to pass on that for now. I used the Cable and Eyelet Rib Pattern from "The Harmony Guide to Knitting Patterns Volume Two". This is the original guide and not the recently re-issued versions. The pattern was easy to remember and fun to knit. I still have to block both of them before packing and sending them on their way. 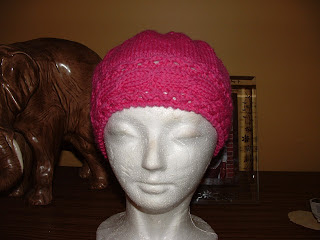 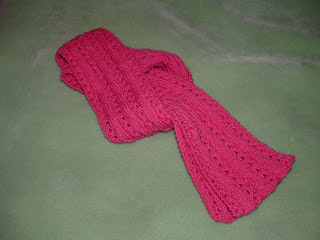 The cold weather arrived and the only person left without a hat was me. I knitted another Odessa with gold beads. This hat is perfect. I wore it to work on a bad hair day and didn't get overheated. It is one of the most comfortable hats I've ever made. Big ups to Grumperina. 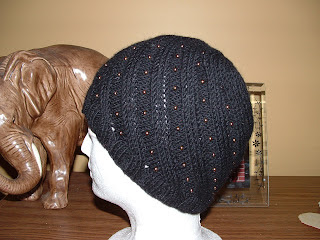 I've been away from the Skyline Jacket so long that when I picked it up and started again my row count was off. It's hard to tell where the mistake was so I've ripped back to where the first decreases began. I'm using the Ott Lite and plan to work on this until the sleeve is finished. That will take two or three evenings then I can get on with the business of putting it all together. The cold whether has left us once again and we are back to temps in the 60's and 70's. Maybe this time I'll get it finished before the next cold snap passes through.
Posted by Beverly at 9:17 PM 4 comments:
Labels: "Cable and Eyelet Rib", Hannah, Odessa, Skyline
Newer Posts Older Posts Home
Subscribe to: Posts (Atom)