To the frog pond went the Chevron socks. While they were too small to get over the arch of the intended user, the leg was sized correctly. I'll have to think this one through before I cast on again. I've never knit socks for someone with such a high arch.

I completed the Green Red Turtleneck today. I was a slacker and used my swatch to save yarn. What I should have done was wet and hang the yarn to remove the kinks. It's looking a little sloppy where I joined it into the turtleneck and I'm hoping a soak will take care of the problem.

The WIP's list is a little out of control and even though spring is officially here, we're supposed have a freeze next weekend, I'm going to have to work extremely hard on moderating myself. There's Daphne from Elseboth Lavold's The Enchanted Garden Collection in Hempathy that I want to make for mom before she goes on vacation. Yarn's in the stash ready to make it's debut, book is waiting for the requisite working copy and the needles are ready to fly. With this one exception the next few weeks will be an exercise in self-control.

Yarngineer asked if our hydrangeas were in full sun. The answer is yes, every last one of them. With the construction of the addition all the remaining trees in our backyard were removed. This didn't affect the hydrangeas and the other flowering plants because most of them are planted in directly sunlight.

The canna's have started appearing! There are still a lot more to come up but now I have hope. They have relatively high water requirements so it will be interesting to see how they fare during the summer.
Posted by Beverly at 12:56 AM No comments:
Labels: Daphne, Green Turtleneck, Hempathy

Not On Sleeve Island

For the past 4 years, mom and I have been gradually increasing the number and types of flowers that we plant around the house. We've alway had azaleas, hydrangeas and for at least 15 years or more hisbiscus in various spots around the house. To enhance these plants we've added several variaties of daylilies, Gerber daisies, oriental lilies, 3-4 variaties of lantanas and along the back fence Lady Banks Roses.

With an eye toward procuring cut flowers, we've also planted several types of bulbs in various beds. These include gladiolas, daffodils, tulips and canna lilies. At one time we tried hollyhocks but only two glorious plants survived the brutal summer that year. We've had sporadic success indicative for the most part of the type of care they received while I was unable to work the beds.

Thanks to weeding and feeding and lots of tlc, I've been cutting daffodils for the house. This variety, which I don't know the name of, is about 15" tall and have flowers that are 4-5" in circumference. They don't have a smell but they are georgeous. 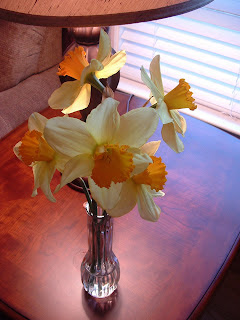 The tulips have begun to bloom, the gladiolas are coming up, the lilies have broken ground all around the house and the only laggers are the canna lilies. I'm not sure how these will do since only two of the approximately 25-30 corms have broken ground. These would be my only disappointment as I've planted about 6 different colors including a lush purple.

I've been recuperating from the nastiness that comes with the arrival of spring in South Carolina. Due to serious brain farts caused by said condition on Friday, I knitted the first sweater sleeve twice before I called it quits. Yesterday was a non-knitting day due to headaches, congestion, coughing and the other blahs associated with it. Today I awoke more refreshed and ready to tackle the challenge so there was progress. Sleevage!!! 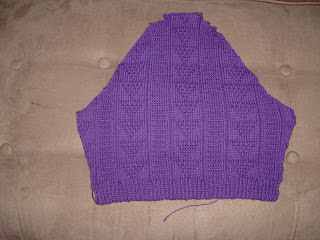 I still don't get the shaping with the garter carriage as easily as I do with the main carriage. You have to proceed in totally different manner due to the needles having only one working position when using the garter carriage, therefore I have the telltale steps at the top were there were more than two stitches to decrease. Sleeve #2 is on the machine at this moment which fell silent about an hour ago meaning that it is time for the handshaping. Now that there's a break in March madness it's back to the machine.
Posted by Beverly at 7:25 PM 1 comment:
Labels: daffodils, garter carriage, kh970

Ka-chunk, ka-chunk, ka-chunk has been a familiar sound in the house recently. The garter carriage has proven a bit more formidable than I expected. In reality I've actually knitted almost two sweaters. There has been a significant about of frogging, rehanging and a quite a few not so pleasant words. Monday evening the back was completed and I'm on to the sleeves which I'm in the process of calculating. (Kathy - You don't have to all the math if you're following a pattern. I chose not to since I didn't want to spend days searching for something that used the yarn I chose from the stash.) 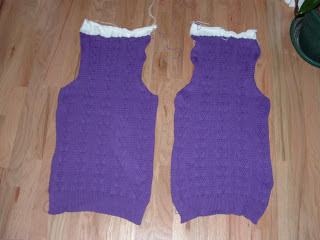 I'd like to know who decided that sweater backs should be knitted first. I knitted the front for the back which resulted in a significant amount of "rippage" because the charting book I'm using uses the "fully fashioned" shaping method. This means that back and front are knit different sizes as is the resulting armhole shaping. According to Ruth Lee, a well-known machine knitter and designer, this results in a more elegant fit. Right now it's not looking too elegant.

I'm going to do cut and sew for the neckline due to issues with shaping on the garter carriage. My stitches kept dropping the narrower the shoulder got and I eventually got tired and gave up. If anyone has suggestions I'd be glad to here them.

I've also been taking time to enjoy the flowers. They're finally making appearance along with the nice green spring coating that comes every year. 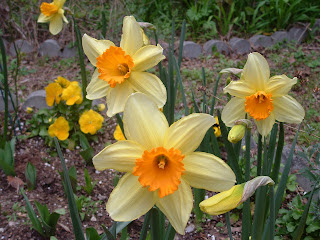 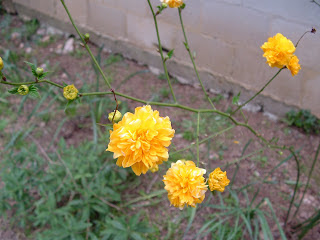 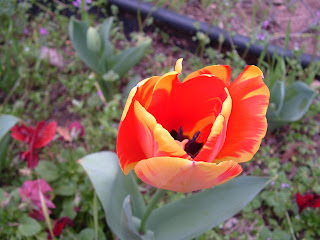 I'm praying that the Canna lilies will come up. So far I've only spotted 2 peeking out the ground. There are more lilies to move and azaleas to plant so the knitting will be on a slow simmer as the daylight increases.
Posted by Beverly at 7:52 PM 2 comments:
Labels: garter carriage, machine knitting

For many years I owned 2 manual knitting machines which saw very limited usage. In 2003 I bought my first electronic machine, a KH970. I played around with it the first year and Xmas '04 I made hats and scarves for all the kids, started learning how to use the numerous features available and started my first machine knit sweater. Somewhere along the line I got sidetrack. Mainly due to space or lack thereof and when the neck problems started everything got nicely packed up and stored away.

Over the past several weeks, I've been gradually getting familiar with the operation of the machine once again. I'd forgotten a lot of things but they've all begun to come back. Earlier this week I knitted this swatch and several others in preparation for a sweater project. 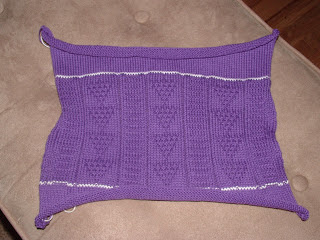 Yesterday after numerous calculations and recalculations I cast on a sweater. Even though I'm very secure about my handknitting skills, I'm still working on having the same confidence on the machine. I miss the ability to immediately check the length and width without having to go through some major effort. 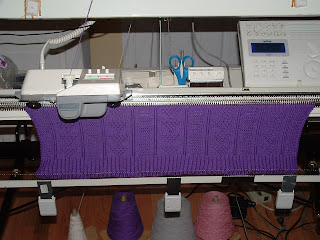 Tomorrow if things go according to plan, I'll be able to finish most of the front and do the back on Saturday. The front is done using the garter carriage which runs independently so I'm happily knitting while it's running. I don't consider the machines a replacement, just a nice enhancement.

It's definitely not as easy as it seems. Yes, you move the carriage but all the setup and shaping requires human intervention and a lot of math! Here's to better knitting all around.
Posted by Beverly at 10:51 PM 3 comments:
Labels: kh970, knitting machine

Sunday a week ago, I commenced knitting on a lace sweater from Vogue Knitting Spring/Summer '99. The yarn chosen, Katia Capri, was a perfect substitution. On Monday as I made my way through the first repeat things looked a little off. I plowed on. When I compared the second set of full leaves to the first the error became obvious. The first set of leaves had a strange little crook in the bottom portion and originated from two branches like legs instead of single leg as in the second set of leaves. I went back to the mag and checked the photo which didn't have the noted imperfections. Rechecked the pattern. Yep, worked as written. It was time to get out the big guns. 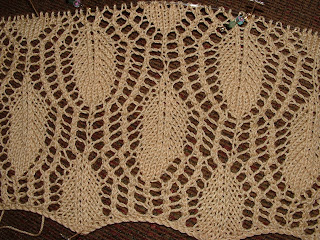 I gathered up several "treasuries" and located the closest relative of the offending pattern in A Treasury of Knitting Patterns. The Trellis Framed Leaf. 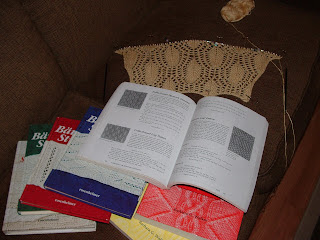 I was amused by this statement included in Barbara Walker's description.

It is often presented in an unnecessarily complex form.
The magazine version repeats over 32 rows and has an additional openwork row separating the leaves. The treasury version repeats over 20 rows without any extra embellishment. I'll make an effort to sort this out later this week but for now it's mindless, quick gratification. 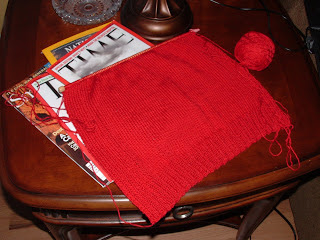 I recently entered a drawing which asked you to describe in a maximum of two sentences how you learned to knit. My mom taught me to sew when I was ten years old. I remember going to elementary school with my sister dressed in matching outfits. That was all well and good except for the fact that I am four years older than her.

I don't recall why but I suddenly had the urge to learn to crochet when I was thirteen. Knitting wasn't really on my raider at the time. With a 60 cent "Learn How To" booklet by Coats and Clark, I spent the summer of '63 learning not only how to crochet, but to knit, tat and embroider. I devoured every inch of that booklet and recently came across it again when I was moving some books into the craft room.

While I've managed to find a place for most things, I'm having a hard time putting the booklet away. It represents so much more than a booklet with a basically ugly odd shade of green cover.
Posted by Beverly at 11:13 PM 1 comment:
Newer Posts Older Posts Home
Subscribe to: Posts (Atom)