Nothing could be finer than to be in Carolina...

On a beautiful spring day with a nice breeze blowing and a bunch of 7 and 8 year olds playing America's game. Even though they lost we had a great time cheering the Rangers on. It wasn't the start of the tournament as I'd thought but a rescheduled game due to testing in the schools.

I managed to capture a few shots of Jaylon in action tagging up and a surprise shot of him taking off for second base. 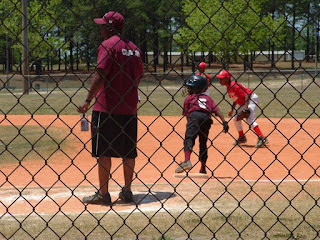 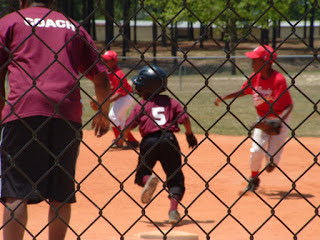 The biggest thrill for him was that his teacher came to the game. She had told him that if he had a game on Saturday she would come see him play.

Earlier this morning as we where getting ready for the day, Isaiah asked me to take something off of his "fingertoe." His fingertoe is his big toe and it had a little snag on it. I was tickled to hear him refer to his toes as fingers and if anyone asked him where his fingertoes were he'd immediately point to his feet. He's changed so much and is turning into quite the "big boy" stubborness and sweetness in the same package.

So for the third month in a row I've had a weekend with the boys. Darius and Jaylon joined us after the game for the shopping trip to Wally World to pick up goodies for grilling out today. The rest of their family,Dad Charles, Mom LaTina and sister Kayla joined us later for dinner. We all were stuffed, happy and sleepy. It's been a fabulous day!
Posted by Beverly at 10:44 PM
Labels: baseball, Rangers

What fun! I miss those days when the boys were little.

Hey, yo, you been tagged. Now bring it with your bad self and 8 things.

Just kidding. But yeah, you are tagged.

Great great action shot taken of him unexpectedly. I love baseball. I do want to hear your 8 things. I have loved this meme for bloggers I know. I learn so much. Glad yarngineer tagged you.