Today I made a special delivery. Due to health issues I've spent an inordinant amount of time at the CVS nearest to my house. Over the past several years most of the pharmacy staff has gotten to know me by name. Elaine, the pharmacy tech, recently had her first grandson. She joked about what was I going to knit for him, but little did she know that I already had something in mind. Today I made a special delivery for her. 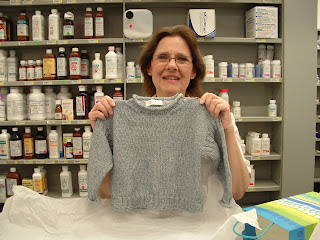 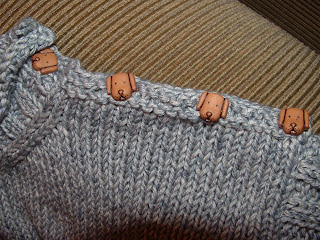 Mods: The sweater is designed as a tunic for girls. I shortened it to sweater length and omitted the side flaps. I also omitted the two front pockets. I was looking for blue buttons and the only suitable ones we found were the doggie buttons. They add that little extra that was needed.

Once the pollen stops falling I'm planning to make this one of my outdoor knitting spots. It's the bbq pit we had built this winter. Mom has already purchased the fabric and foam for the pillows that will surround it. I'll be doing the sewing and assembly. The grills for the pit are on order. We do a lot of cooking out so I'm sure that we'll be spending a lot of time out here grilling and chilling. 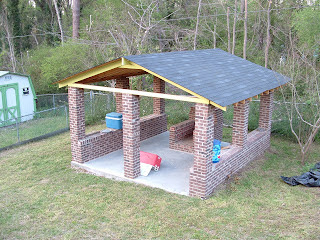 Theresa asked about the floor a few photos back. Yes that is the floor in the new section. It's red oak like the floors in the original house. We can do rugs but no carpet. I have severe dust mite allergies and don't have either in my bed or craft room.
Posted by Beverly at 8:52 PM 6 comments:
Labels: denim, Zoe

Yesterday was a wonderful day. Having a house filled with the sound of laughter is a wonderful thing, especially the laughther of children. We missed Charles and his family and Billy and the Georgia clan. Billy's children from Aiken; Bryant, Brenna and Jessica, and their mother, Cindy, came up.bRebecca and Isaiah came over. Byron my youngest brother and Isaiah's dad, was here from Greenville. They played games, enjoyed good food and played more games.

Brenna, my niece, is modeling her Retro Redux Shrug. I finished it about two weeks ago. I made it a little longer than the pattern called for in the largest size and it fits her perfectly. She's grown a bit since I last saw her during the New Year holiday and is now taller than me! 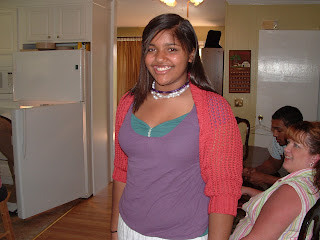 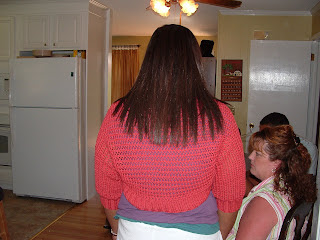 Modifications: I added a few extra rows in the body length. It fits her perfectly, much better than the original would have.

These photos are of the Carnival Cardigan that I made for mom using EZ's percentage system. She's been wearing it for over a year. I recently bought the clasps and sewed them on. 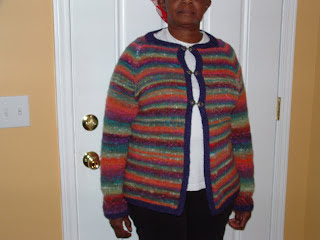 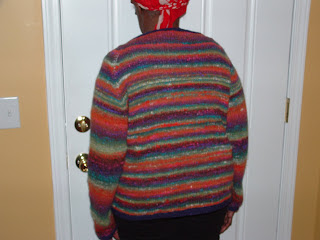 Mom loves this sweater and has gotten a lot of wear out of it this winter. I love to knit for her because she truly enjoys whatever I make her. I'm currently working on a sleeveless sweater for her using Hempathy in the cool blue colorway.

The falling pollen is turning everything green and the flowers are blooming. All I can think about are the sweaters I want to knit for the spring and summer. I'm still focused on finishing the current wips but I've gotten to the point where I can start another. Spring fever is in the house!
Posted by Beverly at 8:23 PM 4 comments:
Labels: Carnival Cardigan, Retro Redux Shrug

The lys has all of its' Plymouth Indiecita Alpaca Sport and Worsted weights discounted to $2.00/skein. Of course I couldn't resist.

Joke of the day: Someone told Maureen, the owner of the Hook 'N' Needle, that I buy the discounted yarn to sale on eBay. It's good idea though. I'll file it away for future reference. This has to be someone who's never seen my crafting room.

Some people really need to get a life!
Posted by Beverly at 11:50 PM 5 comments:
Newer Posts Older Posts Home
Subscribe to: Posts (Atom)