Friday I had a slowdown on the Swallowtail Shawl. The first row of the Lily of the Border Chart 1 gave me fits. The nupps and repeats were off several stitches each time. Four times I ripped back the row and tried to get it right only to realize that the problem was 2 rows down. All is well once again and I've taken a brief hiatus.

The second sleeve of Rachel was completed on Monday. Woo hoo!! I'm putting off blocking until the week mom goes to Reno. With all the dust and stuff going on at the moment it's best to wait until they take a break for that week.

Today I ripped the Corded Rib socks back to the toe. Hard as I tried, I couldn't stand the neon green traveling stripe that developed. The more it moved the less I liked it. When I started the gusset shaping things got even uglier. 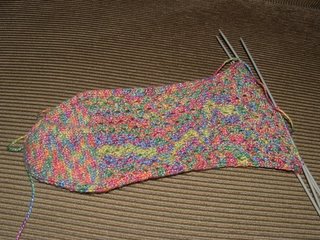 Since I haven't been able to knit much for the past few days, exacerbation of the shoulder and neck issues again, I turned this ..... 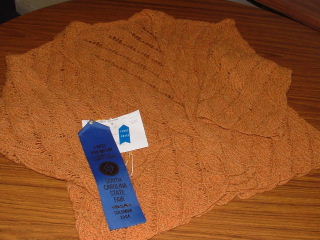 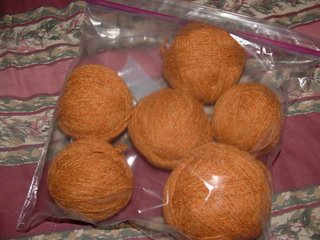 Even though it was a first prize winner at our State Fair in 2004, I'd outgrown it and was never really pleased with the fit. I'm not sure how many skeins of Silky Wool was used. It'll go in the stash for now while I figure out what to do with it. My next sweater project is Tilia by Elsebeth Lavold in Hempathy.

In the meantime, the drywall, mudding and ceiling are finished. They'll put in the doors and moulding next week. I think I've decided on a shade of gold for the craft room. I don't want a color that is too bright or too dark. We won't be using it anytime soon, it's going to be part of our living quarters while we have work done in the original part of the house, so I still have a few months to plan the set-up for the space.
Posted by Beverly at 9:14 PM

OH NO!! I Cna't belive you frogged it. Your on a roll...So what will you do with it? I've never used silky wool I bet it was just beaufiful

I can't believe you frogged it either! It was gorgeous, but I'm sure you'll turn that yarn into something else equally gorgeous. I love Silky Wool.

I'll write again later, when I recover from the shock of your trip to the frog pond (boo-hoo).
Can't wait to see more pics of the new living space.