Knocking my socks off!

I love it when a plan comes together. Making the committment to work exclusively on the projects currently listed on the WIP lists is turning out to be a positive decision. I purchased MSKS last weekend and my immediate inclination was to start another pair of socks. That was until I honestly and without excuses inventoried my current wips.

Even though I've looked through the book regularly, picked out several favorites (I'm leaning toward the Tessalations) and evaluated the sock stash, I've remained true to the "sock moratorium." Progress so far has resulted in 1 out 4 socks being completed, 3/4 of another pair and two complete singles both with the second foot started. 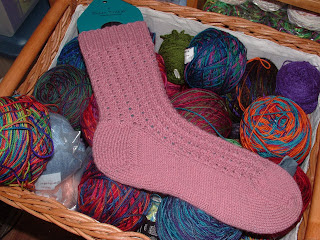 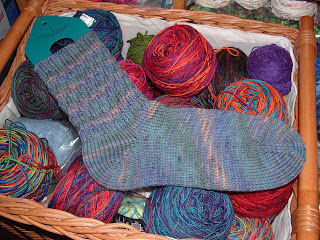 Alternating 2x2 Rib
I'm sure this won't last permanently because it's not my modus operandi, but it's a lot less stressful to get things under control and not feel like I'm not really getting any where. To the same end, I've been monitoring my yarn purchases. The temptation is strong and I'm so glad that I found out about the Knit Happens online sale way after the fact! I got several addi's but missed all of the yarn. It's been well over a month since the last yarn purchase and my lys doesn't quite know what to think of my current yarn buying behavior.

It's been over 14 months since my last cigarette and there's no point in getting control over one part of my life and continuing to let the others go to hell. Spring is a time of rebirth and changes and even though the current weather would have one think it's still winter, it's also a good time for some housecleaning and housekeeping.
Posted by Beverly at 10:04 PM

I have lots of orphan socks that I need to finish or frog. I need to work on those soon.

Both of your SKS socks are very pretty.

Amen! I agree that spring is a time for rebirth/changes/a cleaning out of the old and in with the new! It is not just the domain of new years resolutions. I think in spring the change in weather and sunlight gives us the energy to tackle making big changes. Oooh, I need to clean my house myself.