This weekend didn't involve much knitting. Much of the weekend was spent entertaining two little boys. My nephews Jaylon and Isaiah.

We visited EdVenture "The South's Largest Children's Museum." It's home to Eddie the world's largest kid and one
2 1/2-year old wasn't too thrilled to see him. Even though Isaiah didn't cry the terror was obvious. Jaylon informed me that when he was "little" he used to be afraid of Eddie. He's now 7 and would later show that he's still a little bit on the scary side when it comes to certain things. 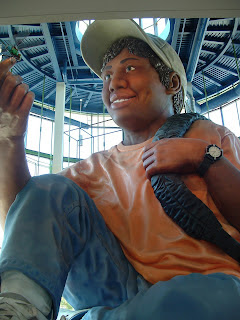 As we toured the Sahara, Jaylon thought it would be a good opportunity to try out a camel. 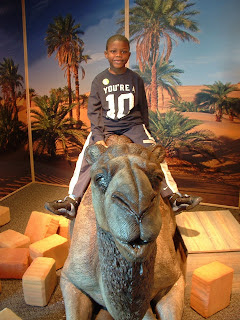 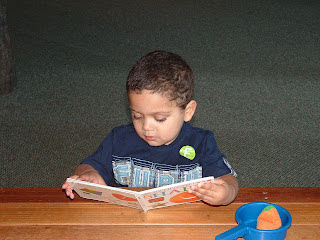 We later picked up Grandma for lunch at Fuddrucker's.

Today was quieter with one little man battling the cold nasties and not feeling so well and the older one as rambunctious as ever. So after almost being pushed out of bed for the past two nights by a little boy who seems to need to occupy a surreal amount of nightime real estate for a toddler and being pushed and pulled in fifty million directions, I'm looking forward to a good night's sleep and so I leave you with a brief conversation I had this weekend.

Isaiah: Aunt Bearly.
Aunt Beverly: What Isaiah?
I: I'm ready to go. (Normally this means home.)
Aunt B: Where are you ready to go?
I: Nitey, nite.

I loved the pictures! What sweet babies they are!

Oh so cute. Nighty night. Good that you asked him and didn't assume anything! I love the camel ride! VERY cool.