Tomorrow I head back to work after 12 days off. This is the longest I've been off work without being ill and I loved it all except for the part where we had to run from TS Lee. San Antonio was a hot 110 when we arrived but the temps dropped to the 90's for the first time in months when we were there.

The VFW and Ladies Auxillary convention was in full force. There were approximately 10,000+ in attendance. We fulfilled our delegate obligations and took some time to see more of San Antonio and get in some shopping.

Despite the heat we did some touring and saw some fascinating points of interest. Of course I visited the Alamo again and we stayed at the Marriot Rivercenter on the Riverwalk and took the riverboat tour but this time they are doing a great job promoting other sites. Even though I've visited San Antonio before I saw much more than I did the first time because I was ill during that trip.

We road the Alamo Tours trolley to see some of the selected sites in order to choose those that we wanted to spend more time visting. The next day we used our "hopper pass" to visit the following sites. 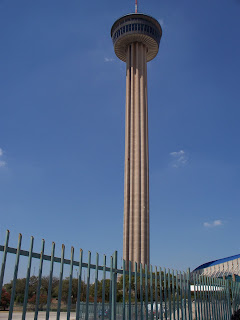 The Tower of the Americas 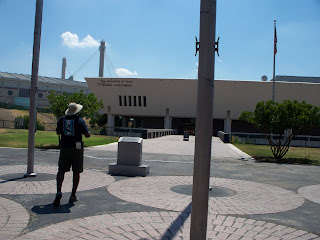 The Museum of Texan Culture 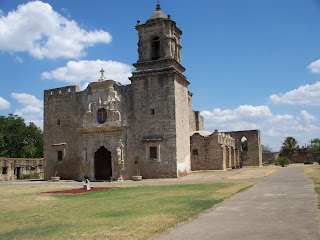 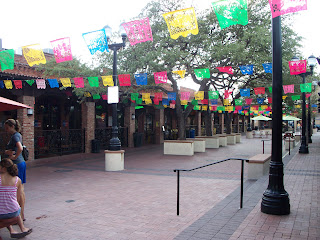 Market Square
One thing that really caught my eye in San Antonio is the architecture. 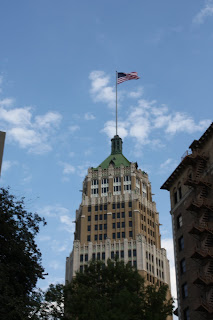 This building was used for the movie Ghost Busters... 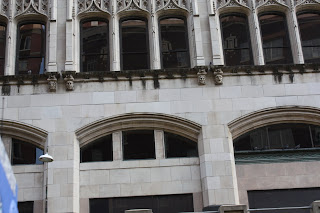 and a lot of the older buildings have the "Uglies" or faces believed to drive away bad luck or evil. The Museum of Texan Culture has 26 flags representing the countries or ethnic groups that have infleunced the development of San Antonio and it clearly shows in the architecture.

We left Texas on Friday heading to New Orleans and straight into the path of tropical storm Lee. The bellhops at the hotel were keeping track of the storm and tried to convince us to go around but since we already had reservations we continued as planned. The closer we got to New Orleans the worst the weather became and by the tame we arrived at the hotel that night the winds where high and the rain blinding. We spent the night, cancelled the remaining days when we got up that morning and hightailed it out of there. At that time they were expecting the storm to remain stalled until Monday and even though it didn't turn out that way we were glad we left.

Mother and I were stuck in a hotel in Orlando in 2008 during a TS that stalled and shut down everything and we didn't want to relive that experience.

We had a wonderful trip. Nothing beats driving through and actually experiencing the country you live in. There is a lot still to be done in Biloxi, where we spent our first night of the trip, and New Orleans. There's also a lot of work to be done in Texas with the drought and fires but I love visiting and seeing the USA.
Posted by Beverly at 9:31 PM

All of the sites are new to me! Thanks for the tour, I'm so glad you had fun....good luck with work
Reentry is a .itch I always say

hee hee hee go get that tattoo. i want one ! she got it for her 80th birthday!