I needed something fairly quick that would give me a break from the Christmas knitting and Caera was indeed the right pick. 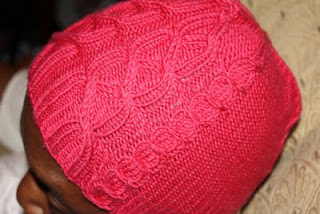 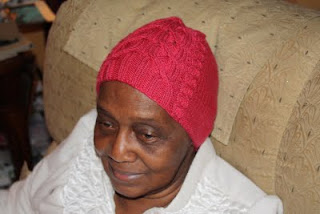 I like the feel of the yarn but it has given a strange cast to the hat. I could see the small fibers coming to the top as I knitted. I'm glad this is a hat that won't be subjected to the rubbing that would cause it to pill. I've already picked off several tufts of fiber today.

I searched high and low for the fingerless gloves that I'd made for mom and finally came to the conclusion that she must have taken them with her on the cruise. She said she used them on the bus to and from Miami to keep her hands warm so I'm finally getting around to taking pictures. 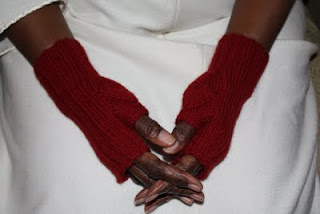 She loves them and has worn them regularly since I gave them to her. I have another pair in the works but she probably won't get them until after Christmas. I highly recommend this pattern.

That's the update for now and thanks for the gingerbread suggestions.
Posted by Beverly at 10:13 PM
Labels: Caera, Green Thumb, hats, Knotty Gloves

It's so nice the knits are getting some good use!

I am off to look at mooseknits. Glad you like to knit the fingerless!