I love college basketball! I can't dribble and I can't shoot, but having grown up in a family with siblings who played on the high school and college level, I grew up with a strong understanding and appreciation of the game. The closest I came was score keeper for my high school team.

March Madness means almost round the clock viewing of both men's and women's basketball games. This results in very little knitting production. I tend to get caught up in the games and the knitting just sits idly in my lap. It's almost as bad as the Olympics. 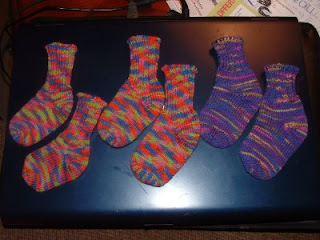 They are nice and easy mindless knitting and look oh so cute. While knitting these it occurred to me that I never knit socks for any of my nieces or nephews when they were babies. Three of them got toddler socks. For some strange and unfathomable reason it never occurred to me to knit baby socks.

Through Ravelry I discovered the Dizzy Sheep. The site is run by The Village Yarn & Fiber Shop. They have new special every day called the "Daily Dizzy Deal". I ordered the Plymouth thinking it was white but it's natural. I was going to use it to make a sweater for my next door neighbor who wants me to knit her a white sweater. I'll save it for something else calling for DK weight. 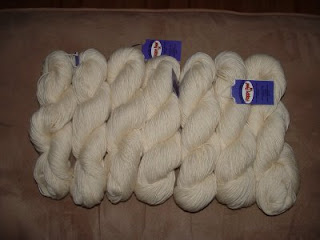 The Mountain Colors Winter Lace was new to me and I just couldn't resist these two colors. The red is Ruby River and the blue Marias Fall. It is the same composition as JaggerSpun Zephyr. 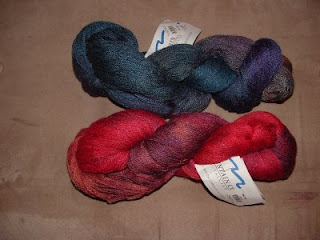 I rewound the Kauni EA in preparation for a sweater. It is much easier to see the color repeats in cakes than in skeins. Two skeins out of the five had interrupted repeats. 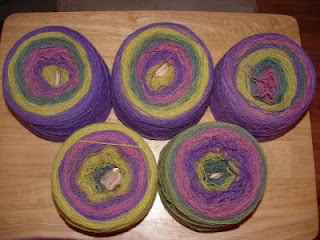 I'm going to use a Fair Isle pattern from Sheila McGregor's Traditional Fair Isle Knitting. I'll be using Ruth Sorenson's Kauni Cardigan pattern as a guide. I've been fighting the temptation to jump into this project every since the yarn arrived.

I've completed all but two pieces of the Cassidy cardigan. I finished the left front over a week ago. 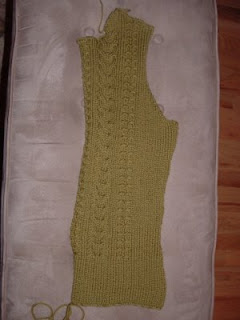 In the midst of watching games I kept making mistakes on the cables. I'm committing myself to finishing this during the remaining games even if it involves some ripping.
Posted by Beverly at 9:06 PM

Love all your new yarn. Cant wait to see the FO's. I also LOVE, March Madness. I will be watching the Maryland Terps tonight and just hope my heart can take it after Saturday's game.

I can't wait to see your sweater. I may have to knit another one with a different pattern -- I so enjoyed the one I'm doing.