WooHoo! I had a great time at the SC Knitting Guild's annual Knit Inn in Greenville, SC. Even though I didn't get in any of my classes I had a great time hanging out with knitting friends from previous years and making new friends. There was close to 200 women in attendance including Lynn from Minnesota who used to live in Columbia. I got to hang out with knit buds Lou and Lori from the Rock Hill area, saw Teresa aka Yargineer with her sweet little man, Deborah and Gail and a host of other knitters.

In the evenings we went to dinner with little bro' Byron and I must recommend City Range. The food was delicious and the service quick and excellent. We also hit PF Changs a usual stop for us on the knitting weekend.

I didn't make many purchases this year. I bought sock yarn and one beaded scarf kit from the vendors on site, Yes Yarn and Northwood Fiber and Farm. I was looking forward to purchasing some hand-dyedfrom Teri at Northwood, but sadly she didn't have any available. 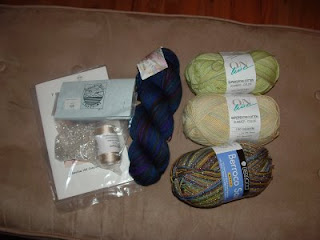 I finished two sweaters. I finally got the buttons sewn on Mr. Greenjeans. 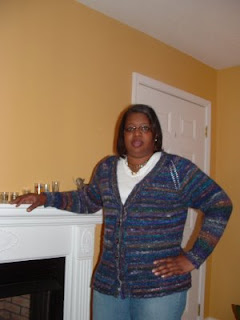 I made the sweater much longer than the pattern called for. I also extended the buttons a little further above the vee since the placement wasn't all that flattering on me and made the sleeves long. The sweater was finished for almost a full 2 months before I ordered the woolwash and blocked it. I've worn it and it is very warm and comfortable. 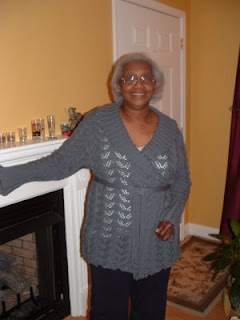 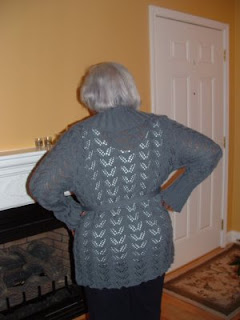 I completed the back in November '07 and it rested until October '08. I had all the pieces completed in November '08 and didn't pick it up again until I blocked it the end of January '09. It was a pleasure to knit and I plan to make it again in a cranberry color using the same yarn.

I also started knitting one of the Kureyon sock skeins. I'm knitting a pair of plain toe-up socks for mom. The colors are a little funky but I'm going to match them as much as I can. My original plan was to knit it as it was skeined until I realized that I could match most of the repeats. I have enough to match the foot and leg but not the ribbing which will be hidden anyway. 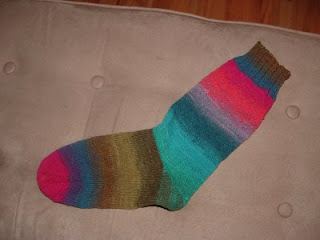 There was a big surprise waiting for me when I got home today. 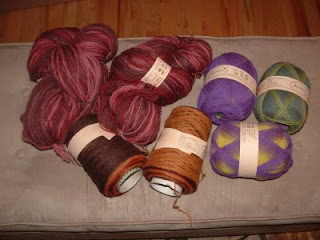 I ordered some Kauni and undyed Trekking from Astrid's Dutch Obsessions on Jan. 30th. I was expecting it to take a few weeks and the package arrived today. I'm waiting on a shipment of the Rainbow Kauni from a stateside store. It's currently backordered but when it arrives I'll be making the famous Kauni sweater in the rainbow and/or the pastel I ordered from Astrid.

I recently subscribed to Knitcircus magazine after seeing the Rosepole design by Elizabeth Morrison in Kauni Effektgarn. The jury is out as to which color I'll use. So big plans ahead with lots of finer gauge knitting. In the meantime I'll be finishing and clearing out other projects to make room for the new stash.
Posted by Beverly at 8:48 PM
Labels: "belted wrap jacket", "Knit Inn", "Kureyon Sock", "Mr Greenjeans", "Silver Thaw", Kauni, Noro

woohoo back atcha!.. sounds like you scored big time.. I see lots of knitting in your future.. The sweaters are awesome. Sounds like you had a ball. I love the kauni I picked up at Stitches. I don't know what I am going to make.

What a haul! I love the sweaters, especially the one by Shirley Paden. Glad to see you back full steam!

Wow, what great projects! Both sweaters really turned out great.