Yesterday I could barely stand to keep my eyes open and did manage to sneak a quick nap in late yesterday afternoon. The Knit Inn was great. It was nice to see the knitters that I met last year, especially Lou from Rock Hill. I hung out during the day with Deborah, Gail , Anita, mom and Heather aka Yargineer with her cute baby pooch. I also made some new knitting friends and hope that we will be able to stay in touch and get together during the year.

The hotel was nice and the guest Happy Hour from 5:30-7:00 was even better. It was a hoot to see all these knitters show up with projects in tow and drink cards in hand. We had dinner at PF Chang on Saturday. I missed going to the restaurant that was in the hotel when we were in Vegas. The reservation service is a joke, but the food was delicious.

I was waitlisted for two of the classes I registered for. The Shawl Design class was informative and I came away with some good info which will help me with future designs. The instructor was Lainey Haule who was president of the guild last year. I was surprised how many people remembered me from last year and happy to see them again.

There were only three vendors, but two of them managed to separate me from a good bit of my funds. This year the guild invited a basket maker, Roy Greene. He had some beautiful handmade baskets and I quickly picked up two of them. The larger basket was used to carry my working project during the remainder of the Knit Inn. 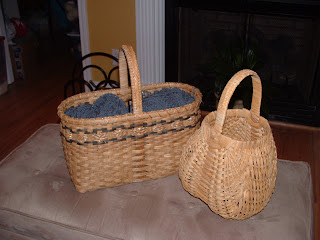 The others were knitting vendors, however, my purchases all came from North Woods Farm Fiber and Yarn out of Campobello. I purchased several skeins of sock yarn and several addi Turbo Lace needles. 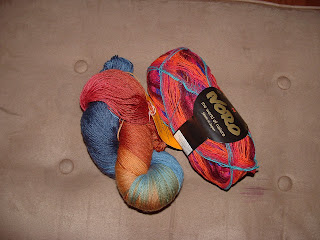 I've long wanted to try the Schaefer Anne and the Noro Kureyon Sock. All the Noro was the same color, but since this is probably the closest I'll be to it for a while I picked up a skein anyway. 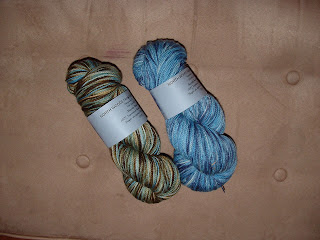 I purchased two skeins of the North Woods Farm Superwash Merino Sock yarn. One because it reminded me of stonewash blue jeans and the other just because. Twelve skeins of the new Plymouth Yarn Happy Feet sock yarn. At $5.99/skein I just couldn't pass it up. 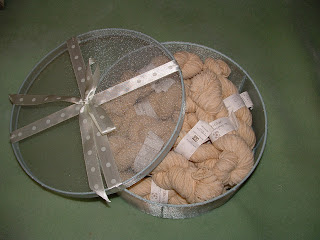 Waiting for me when I got home was the package from Herrschners. The Twilleys Freedom Spirit in Natural and Passion for the Guimauve hat by Woolly Wormhead. 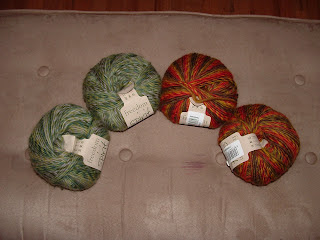 Lucky You my friend. LOVe the door prize. I laughed at the image of the drinks and knits in hand. Im so glad you had a good time. Love all your yarn picks. Im socked out right now. But yours are tempting....

Lucky You my friend. LOVe the door prize. I laughed at the image of the drinks and knits in hand. Im so glad you had a good time. Love all your yarn picks. Im socked out right now. But yours are tempting....

Sounds like a wonderful time. You have wonderful yarn and baskets too!

So many lovely yarns, and the baskets are very nice too. I love all kinds of baskets. :o)