You never know what you'll get when you buy the generic box of daylilies from Sam's. Mom bought two boxes and planted each box in a temporary planter.

The first box of lilies was rather dull and didn't produce many flowers. Most of the lilies from the second box have bloomed or are in the process of blooming. The flowers on these plants have been white with the exception of the one new bloom found today. A Stargazer! 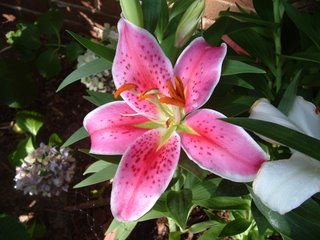 Knitting has been devoted to the Toddler Ringel Color socks and the River Stole. The socks are almost finished. There's about an inch to go excluding the picot hem. I still had to consult the book to turn the second half of the short-row heel on the second sock.

In the next couple of weeks, I'll go through my sock books, magazines and patterns. The goal is to note the various toes and heels that I haven't attempted and would like to try. There are so many options and I've been stuck on the same techniques for a while. Some might say "if ain't broke don't fix it", but fitting the socks for my niece made me realize that the techniques I use may not apply to the feet of others.

The River stole is now a tad over 19 1/2 repeats long. That leaves less than 8 1/2 repeats to go. If I can stay focused long enough this weekend I'll finish and block it. I still haven't decided on the next shawl/stole project. The only thing that's certain is that it won't be for me.

These are the 2 socks on 2 circs in Regia Cotton Color. 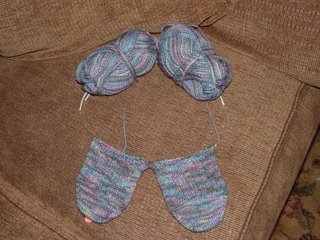 I'm knitting them a little loose hoping that they won't shrink as much as the Plus Cotton Cloverleaf Ribs did after washing. I always forget that cotton doesn't have the springiness or elasticity of wool.

I'm off to dig the Ribs out of the sock basket and here I was thinking that I'd never knit a pair of summer socks before. Nothing like a good memory jog. Between the butt/gut spread and the brain fog, in the past year middle age has crept up on me with a vengeance.
Posted by Beverly at 8:49 PM

I love Stargazers! Lucky Mom to have gotten one in the generic mix! The sox look great - I wish I could be so motivated as to start another pair!

Wow, that flower was worth waitng for. What a great surprise. Great socks!

Gorgeous flower! One of these days, I'll make two socks on two cirs.

Stargazer, is such a treat. Does it smell as awesome as it looks?

I cannot wait for a River STole update. You are a patient knitter my friend