In the early 80's my middle brother, Charles, bought his first car. He called it the "Sh** Brown Granada" because of the dark brown color of the car. We all a'dopted the name and various acronyms such as "SB", "SBG" and the lesser used "Sh***y. The dark brown in skeins 4 and 5 of the KPPPM immediately made me think of that car. I'm still pondering whether or not that's a bad thing. (We had a lot of love for that car.)

Skein 5 or color D, which I selected for the midpoint of the shawl, is composed of browns tinged with green to peachy browns. It has brought the colors into better focus and toned down the colors. 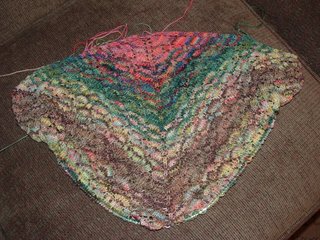 (I'm on the repeat of colors B & C. The size pre-blocking appears to be more shawlette than shawl.)

On Sunday I began my adventure in "Heels and Toes" with Judy Becker's Magic Cast-On from the Spring '06 issue of Knitty and a skein of Regia Bamboo Color in the Clown colorway. I found it rather tough going and gave up in the wee hours of Saturday night after numerous attempts. I re-gathered my thoughts and tools Sunday afternoon for another go round. Voila! 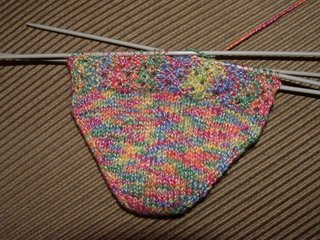 Corded Rib socks from Sensational Knitted Socks. The colors are pooling on the patterned rows, a totally unexpected occurence given the way the yarn is dyed, further proving that there is a stitch pattern that will make almost any variegated yarn pool. It looks pretty neat at the moment. I'll knit on for a couple of inches to see how the pattern continues to develops.
Posted by Beverly at 7:37 PM

Charlotte and your sock both look great.

The shawl is gorgeous . I have loved it since the first posting!

Good for you and the sock success. I would have stayed defeated awhile, you got right back in there! Love the look