As creeks trickle into streams and streams flow onward to join rivers, the Fiber Trends River Stole has completed it's journey.

This is the second pattern by Evelyn Clark that I've knit and as before I found it to be an enjoyable knit. Very repetitive but enjoyable. There aren't any errors and the only issue I had developed when I was knitting the picot edging. The problem was not the edging or the pattern but a major brain fart.

Late yesterday evening I banned everyone from the living/family/den/dining room and moved furniture to create a blocking space. Two cutting boards made the perfect blocking surface. We've had one of them since I was in my 20's and its' age is definitely showing. (You never know how bad something looks until you take a picture of it and all the stains and blotches show.) The stole grew much more than 33% indicated in the pattern. Blocking it turned into a battle of wills which I won of course. 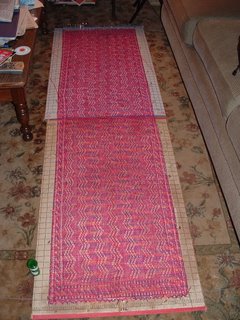 My sister graciously played photographer and took some outdoor pics of me wearing the stole. I've been hesitant to take photos due to the 40+ pounds I gained when I was almost completely bedridden last year. I usually take couch or hanger shots to hide this new me and I'm realizing that I'll be hiding for quite a while if wait until I'm back to my old size. 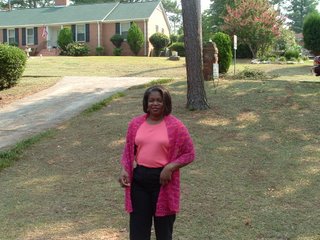 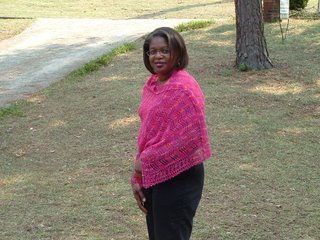 This afternoon I started the Koigu Lace Shawl. I've completed the first 25 rows and like the feel of the yarn. Soft and firm but not stiff. I'll have to knit with the other colors to be sure about the colorway I've chosen.

Oh my, that thing is beautiful. I'd be wearing it ALL the time, even to the grocery store! (yep, that'd be me in the Tevas and stole).
And I should look so good with my extra 40. Sigh. You must have been a stick before last year.

Great job, and the colors look wonderful on you.