Batter up. Mr. 1000 was 2 for 3 in the championship game yesterday. The game was tied at the end of regulation play and went into an extra inning. From then on madness ensued were still tied at the end of the third inning. The umpire signaled stop and play will resume on Friday. 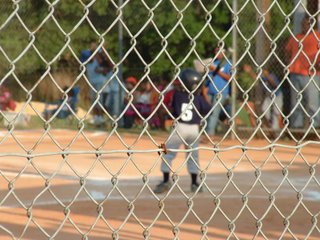 Mr. 1000 at bat
I was amazed at the behavior of the head coach of the other team. It's really a shame that kids are exposed to such poor shows of sportsmanship at such an early age. His teams have always won the championship games and he has finally run into some serious competition.

Tuesday I learned that while I don't usually have a problem multi-tasking, I cannot multi-task and knit lace. I attempted to watch a Hallmark movie starring Sidney Poitier, surf the net and knit on the River Stole. In 1 1/2 hours I had to repeatedly frog all our part of the first 4 repeat rows (Helen's Lace can stand up to some serious frogging). That left me 6 rows short of my goal of 1 repeat per day but I thoroughly enjoyed the movie. 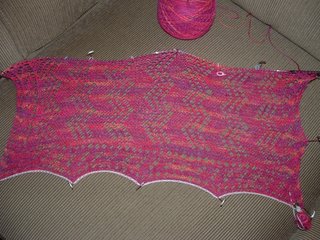 Fiber Trends River Stole
Even though it's been in the 90's, the front lilies are finally blooming. They are clustering very slowly. I don't have the names for these. Mom bought them at an SCDMH lily sale and we've lost the tags. 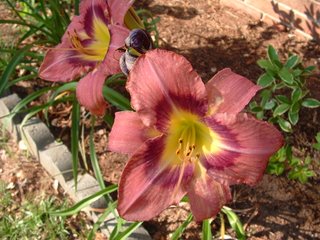 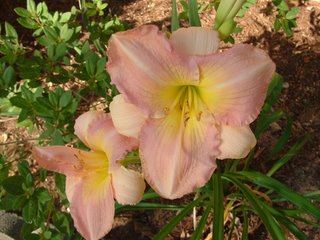 Peach with a soft pink blush 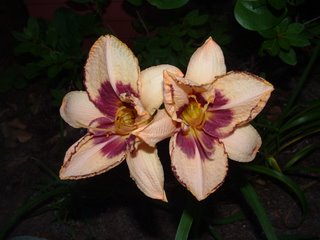 Peach with a purplish,burgundy center
Posted by Beverly at 7:44 PM

The stole is lovely. Great colors!!!

Hi Beverly, I like your knitting too! Very nice.