This was my first time participating in the newly name Ravellenic Games. I joined with high hopes and big ambitions. To accomplish that I entered the following events and projects.

I got everything ready and made sure I wasn't missing any additional supplies such as stitch markers, rulers and the things that generally go in a knitting kit. I started my main project, Drop City, during the Opening Ceremonies and after several froggings and restarts the stage was set. Regardless of how hard I tried it seemed that this was the one time I couldn't knit and watch TV at the same time.

I'm one of those people who really gets into sports with all the hollering, screaming and sometimes not too clean language that goes along with it. I said to myself that since I didn't get much done on day 1 I would make it up on days 2 & 3 because it was the weekend. Wrong! Let's just say that I love the summer OG's, but hated the delayed broadcast and the senseless chatter that was unnecessary and interrupted the events continually which lead to many late nights watching the recaps. I was glad that it was streamed live via cable even though I couldn't watch it at work. It was one of the few times I've been pleased with Time Warner Cable.

As time passed I realized that I wasn't on schedule and would never be and I'd be lucky if I finished the scarf during the OG's. I decided to save them for another time. I did finish the Drop City scarf with one day to spare 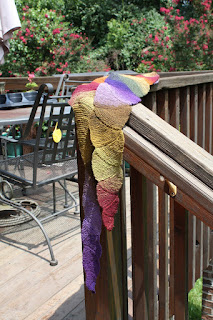 Knitting the thinner version I weighed the yarn and divided it equally into 2 halves but still had yarn leftover. This is the first design by Kitman Figueroa that I've knit and I found it to be a well-written pattern. I liked the pattern so much that I plan to use it for some of my Christmas presents.

oh, who cares about time limits and stuff for knitting? you made a gorgeous scarf! though, i'm sorry that your plans were dashed.

Hello,
Love this scarf and the shawls you make.
Thank you for sharing