Leftovers Are Good For You

For several years I've been saving the little balls of yarn left from socks and more recently (as in last year) fingerless gloves. I've used some of it to make baby socks but was at a loss as to what to do with the rest. I knew I wouldn't knit a sock yarn blanket because blankets aren't my thing. My original plan was to save it for sock repairs which have proven to be few and far between so that the amount on hand has continued to grow.

I bought Think Outside the Sox at Stitches South last year and one of the patterns that caught my eye was the Drip Candle Socks. They were knitted using one of my favorite yarns Cherry Tree Hill Supersock Merino. This past week I pulled out all of the balls that used yarn with a content and twist similar to the Cherry Tree Hill Supersock. Below is the result of that search. 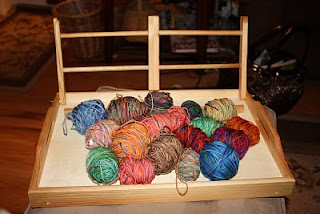 I have enough leftovers to make at least 2 or 3 pairs. I started the first pair today and so far I've used eight of the colors I pulled for this pattern. 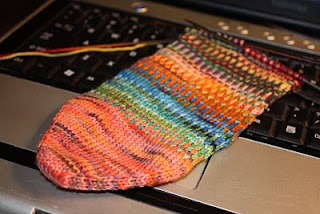 This first sock may not be keeper since it is quite snug on the foot. I'm going to put this foot in time out and cast on another with more stitches using the same color scheme. So far I've found the pattern to be quite meditative to work. It is a very simple 2-stitch, 2-row pattern that works up very quickly.

I've been successful in that I haven't purchased any yarn. I did add two skeins of Red Heart Heart & Sole that was in our Knit-Inn baskets. I have mom's skein and mine and will use them to make either socks or fingerless gloves. I'm having success going "Cold Sheep" and it's a pleasure to walk in the room and pick out yarn for whatever project I want to make.

Last year by this time I would have hit all of the sales and added a significant amount of yarn to the already burgeoning stash along with the associated guilt of buying yarn that I don't need. This year it's about making do with what I have and being happy and guilt-free without all the excesses.
Posted by Beverly at 9:23 PM
Labels: Adamas Shawl, Drip Candle Socks, shawls, socks

Love the term going COLD SHEEP. Did you coin it?

your socks are going to be lovely. HEre is to some stretch in that one you think may be tight...

That a good project in stash mindfulness.

That sounds like what I do with the food in the freezer! Lovely socks. ;)