I returned yesterday from Indianapolis Indiana where my mother and I attended the VFW and Ladies Auxillary of the VFW yearly convention. We had a great trip and found the people to be very friendly. We are used to people speaking on the street here in South Carolina and were pleasantly surprised that they are the same way. We stayed at the Hyatt Regency across from the Capitol and had a great 16th floor view.

I was also amazed at how flat Indianapolis is. After riding for hours through the mountains of North Carolina, Tennessee, Kentucky and Ohio you suddenly reach a place that is completely flat for as far as the eye can see. Even from our hotel room all you can see is flatness. Columbia is also situated on hills and hour house sits on a slope at the top of a hill.

This a picture of us at the Patriotic rally on Victory Field. 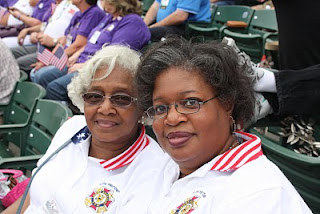 The doctor has been on me to lose weight and it has been a struggle for me. I weighed about 145 in 2005 and I'm up to over 235 having gained over 50 lbs of that last year. I rarely take pictues for that reason but I love this picture of me and mom.

Indianapolis has some of the most beautiful war memorials I have ever seen. The Soldiers and Sailors Monument at Monument Circle is beautiful and I was taken aback by the sculptures of war and peace. They both evoke the feeling of each one so well. 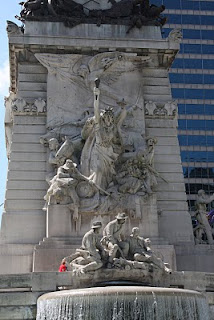 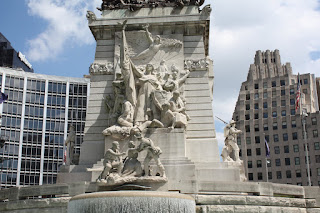 Peace
Underneath the mounument is the Colonel Eli Lilly Museum. It is a museum about Indiana's role in the Civil War. It was very informative although some of the displays saddened me with the discriptions of hardships, disease and injuries the soldiers endured. I heard one mother explaining to her child that war is a terrible thing and that these things do happen after the child expressed that she wanted to leave.

I made some great progress on my Heavenly Blue Cardigan. 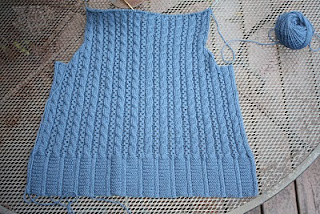 The color is a deeper blue in person. I'm using St-Denis Nordique and though it doesn't feel very soft I have read on Ravelry that it doesn't soften when washed.

I got some much needed rest while I was there in between meetings and touring. We had a wonderful time and next year we'll be in San Antonio. I don't attend the conventions each year but I've been to one in San Antonio and even though my health was somewhat compromised at the time I still enjoyed the trip and I'm looking forward to next year.
Posted by Beverly at 10:34 PM
Labels: "Heavenly Blue Cardigan"

Your cardigan looks good, lovely color. I'm glad to see someone else knitting that pattern.
I'm used to people speaking on the street, too, and am always glad when they do. It isn't the norm here in Colorado.

what a great post, You and your mom look sooooo cute. I also love this picture. Thanks for sharing it with us. Looks like you had a great trip. Your cardigan is beautiful♥