When my father died in December 2004 we received several potted plants as is usual in the case of a death in the family. One was a cactus that was in full bloom combined with other plants in an arrangement. This cactus has continued to grow but has never bloomed. The owner of one of our lys told my mom to set it outside in the cool and all of a sudden buds began to appear. It is back in the house and its' beauty is astounding. It has bloomed just in time for Thanksgiving. 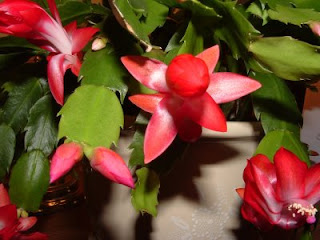 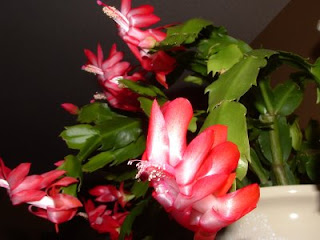 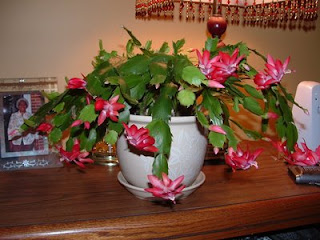 Wow.. those blooms are gorgeous. My mom has a christmas cactus too, and it does better when it gets sunlight, but it doesn't usually bloom this early.

Wow. You have great luck. Sometimes they bloom sometimes they won't unless they have a friend with them all summer. Seriously, My neighbors would only bloom when it spent the summer with mine on our north facing front porch.

YOURS IS GORGEOUS> Enjoy

Oh, it's gorgeous! I have three, and my biggest one is getting ready to bloom now. I always leave mine out 'til it starts getting cold at night, then after a week or so, I bring them in and they start to bud! Don't you love them?
btw, I just had general anethesia, but the headache didn't last long, and neither did the pain! yeah!